A 12 year old lost his mom, a day ago. She was, also, blessed to see her oldest son get married, a day ago. The most sad part is that she, really, never had a chance to fight, for her life. She only found out about 3 weeks ago that she had breast cancer. It was already in her bones and organs, etc. Yes, stage 4 metastatic. She had her first, and only, chemo treatment. She, then, asked her doctors if she can fly to go attend her eldest son's wedding. They allowed her to go ... to fly, at that. I was like what ... why; when she was so sick? She never made it back home; where she had been told, by her doctors, that she would resume her chemotherapy, after missing one, to do this. BUT, SHE DID SEE HER SON GET MARRIED! Then, it occurred to me; that her doctors, most likely, already knew ... AND wanted her to have, and witness, which turned out to be her last BLESSED event, here, on this earth. R.I.P. You will be so missed! ♡♡♡ 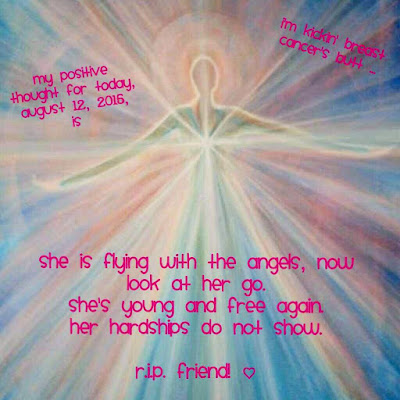 NOTE: PEOPLE ... go get a mammogram, screening, etc.! STOP with the excuses! Catching it (anything) early is your best chance, of a cure!
Posted by SharPharMade at 6:54 PM

I Am A FaveCrafts Winner!

Clearsnap Products (Made in U.S.A.)